Disinfecting robots, smart helmets, thermal camera-equipped drones and advanced facial recognition software are all being deployed in the fight against Covid-19 at the heart of the outbreak in China.

President Xi Jinping has called on the country’s tech sector to help battle the epidemic.

Healthcare tech is also being used to identify coronavirus symptoms, find new treatments and monitor the spread of the disease, which has so far infected more than 90,000 people worldwide.

But is it up to the job?

Robots to the rescue

Shenzhen-based Pudu Technology, which usually makes robots for the catering industry, has reportedly installed its machines in more than 40 hospitals around the country to help medical staff.

Meanwhile, advanced AI has been used to help diagnose the disease and accelerate the development of a vaccine.

Its founder Jack Ma has just announced that his charity, the Jack Ma Foundation, will donate $2.15m (£1.6m) towards the development of a vaccine.

“In the battle against Covid-19, emerging technologies have stood out by making immense contributions in an unexpected, creative and amazingly responsive way,” said Lu Chuanying, a senior official at Shanghai-based Global Cyberspace Governance.

They have helped “arrest or contain the spread of the deadly virus, thus becoming one of the most reliable and trustworthy means of combating Covid-19,” he wrotein an article for state-run China Daily newspaper.

Amid a novel #coronavirus outbreak, robots are deployed to deliver meals to travelers in isolation at a hotel in Hangzhou, China. #pneumonia pic.twitter.com/BgWZm4L1m6

But is all this just for show?

“The state media apparatus, even under normal circumstances, takes every opportunity to send a message about China’s technological sophistication, even if a story has little substance to it,” notes Elliott Zaagman, who covers China’s technology industry and co-hosts the China Tech-Investor podcast.

“I suspect that most of the stories we see about disinfecting robots, drones, etc, are mostly just performative gimmicks. However, tech’s ‘less-sexy’ role in controlling this outbreak should not be dismissed,” he told the BBC.

‘Era of big data and internet’

Beyond robots and drones, China has also mobilised its sophisticated surveillance system to keep a tab on infected individuals and enforce quarantines.

Facial recognition cameras are commonplace across China, and now companies are upgrading their technology to scan crowds for fever and identify individuals not wearing masks.

SenseTime, a leading AI firm, says its contactless temperature detection software has been deployed at underground stations, schools and community centres in Beijing, Shanghai and Shenzhen. The company also claims to have a tool that can recognise faces, even if they are wearing masks, with a “relatively high degree of accuracy”.

Another Chinese AI firm, Megvii, boasts a similar product, which has been deployed in Beijing.

“During this challenging time, we see this not as an opportunity, but our responsibility to do our part to tackle Covid-19 using our technology,” a SenseTime spokesperson told the BBC.

Chinese newspaper Global Times reports that officials in Chengdu city, Sichuan province, have been issued with smart helmets that can measure the temperature of anyone within a 5m radius, sounding an alarm if they are found to have a fever. 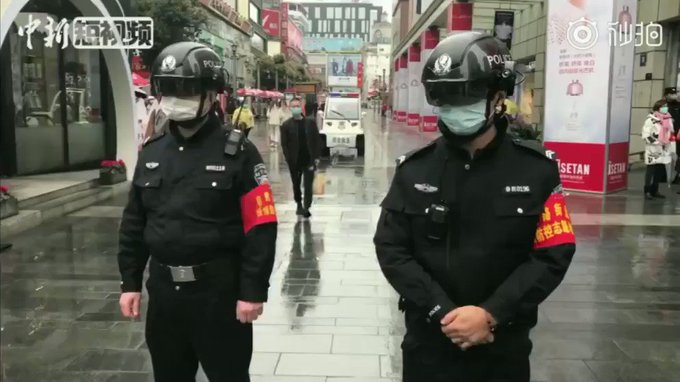 As Chinese citizens slowly return to work despite the virus outbreak, mobile phones have also emerged as a key tool to track the spread of the coronavirus.

An app called Alipay Health Code assigns individuals the colour green, yellow or red, depending on whether they should be allowed into public spaces or quarantined at home.

It uses big data to identify potential virus carriers, according to its developer Ant Financial. It has already been adopted in more than 200 Chinese cities.

“In the era of big data and internet, the movements of each person can be clearly seen. So we are different from the Sars time now,” Li Lanjuan, an adviser to the National Health Commission, said in an interview with Chinese state TV.

“With such new technologies, we should make full use of them to find and contain the source of infection.”

While these new surveillance tools may be considered efficient – and perhaps necessary during a health crisis – they have prompted concerns about privacy.

Many of these health apps require users to register with their name, national identification number and phone number. Authorities have also sourced data from phone carriers, health and transport agencies and state-owned firms.

There is little transparency on how the government plans to cross-check the data, and there have been reports about personal health data being leaked on the internet.

A report by the New York Times, for example, said that Alipay Health Code also appears to share information with the police.

As the apps become more popular, there’s the added fear that it could exacerbate paranoia and lead to discrimination against coronavirus patients.

Critics say China could use the health crisis as a justification to expand its already vast surveillance system, which human rights bodies have described as dystopian.

“If there’s one lesson that Chinese authorities are learning here, it’s where the ‘weak spots’ are in their surveillance apparatus,” notes Mr Zaagman.

“Privacy was already becoming a thing of the past in China. An outbreak like this will only expedite that process”.

Bizarre! Meet A Girl Who Orgasms 50 Times A Day! (Video)

‘I promise myself 10 years ago to disgrace her on our wedding day,’ Groom says

Bizarre! Meet A Girl Who Orgasms 50 Times A Day! (Video)